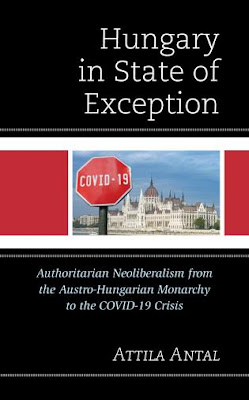 My book, Hungary in State of Exception. Authoritarian Neoliberalism from the Austro-Hungarian Monarchy to the COVID-19 Crisis, is forthcoming from Lexington Books, part of Rowman and Littlefield.
Hungary in State of Exception seeks to analyze the transboundary exchange of political and economic ideas through the global neoliberal hegemonic struggle. Neoliberalism, as a economic and political ideology, defined the history of Hungary not just in the 21st century, but in the troubled 20th century. Eastern Europe played a crucial role in neoliberalism’s rise to control globalized capitalism, and Central and Eastern Europe (CEE) have constantly an incubator of and experimental laboratory for new types of neoliberal capitalism. Antal arguesthat neoliberalism, like populism, is historically embedded in Hungarian political history, its the political form is economic and governmental exceptionalism. This book reveals the common history of Western- and Eastern-style neoliberalism from the Austro-Hungarian Empire to the contemporary COVID-19 crisis. Without emphasis on the century of neoliberalization of CEE, the contemporary rise of regional authoritarianism cannot be understood. Antal also details the relationship between Orbán’s rise and contemporary neoliberal politics in CEE.
Table of contents:
Introduction: Historically Embedded Neoliberalism and Exceptional Measures in Hungary
Chapter 1: The Neoliberalism as a Permanent State of Exception
Chapter 2 The Heritage of the Habsburg Empire: The Historical Impact of Neoliberalism
Chapter 3 Neoliberalization of State Socialism
Chapter 4 The Neoliberalization of 1989 and the Collapse of System of Regime Change
Chapter 5 Authoritarian Populism, Neoliberalism and Exceptional Measures
Conclusion: The Semi-Peripheral Fate: Neoliberalism and Authoritarian Populism 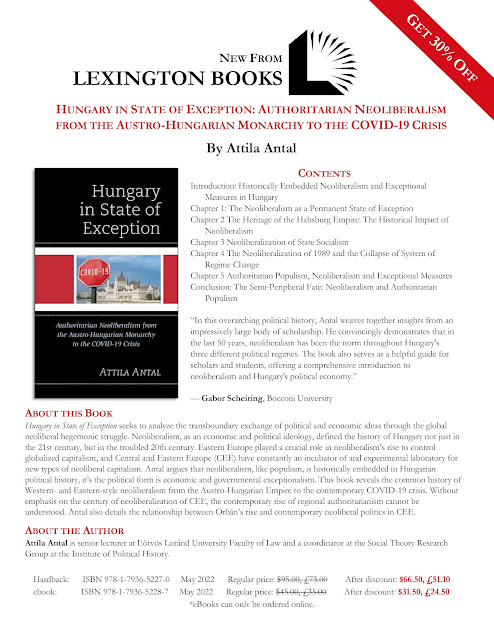